HoustonDragon is taking the lead in a project to replicate Wing Commander III/IV/Prophecy style fighter helmets - and he'd like to know whether you're interested in someday buying one. The original props are actual motorcycle helmets with an artificial front molded and glued onto them to appear futuristic -- the goal would be to replicate this based on the original props currently in the hands of Wing Commander fans. You can express interest, offer further information and just generally help out here on the forums.

Since I ordered one of the flight suits, I was wondering how much of an interest there was for a Wing Commander Confed-style helmet for people?

Examples of the style I'm talking about can be seen here: 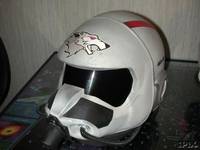 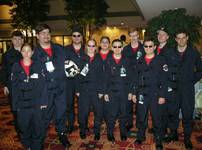 I've contacted a local vendor here in Atlanta who is willing to create the necessary mold (currently, we're pricing this around $500 for the inital mold, which would be good for the production of around 50 helmets), and then create individual custom fiberglass helmets. They would be wearable (using the base interior materials from a generic motorcycle helmet), though certainly would not be certified for use as anything other than strictly a novelty item.

My thought was to leave the basic helmet painted the white primer, and then either someone could stick a decal logo on it, or have it custom painted themselves. We could go ahead and have the two basic red stripes painted on them, though. There's also the idea of having Diamondback, Black Widow, and Wolfpack emblems printed as decals, but that's still up in the air until we can gauge some sort of demand for these.

With the base materials, labor, shipping, and whatever else will go into producing one of these, the current estimate price for one would be between $125-175 per helmet (subject to change, based on material costs), and would likely be finished in time for Dragon*Con 2006. Let me hear your feedback about this.