The CIC's Seventh Birthday is getting closer! With three weeks left to go, it's time to announce some of the door prizes that will be given away to party attendees. Some of the items include Game Boys with a copy of Prophecy Advance, CIC polo and Eisen shirts, CIC hats, CIC glasses, CIC playing cards, copies of the WC Movie on DVD, the DVD version of Wing Commander 4, press kits, Wing Commander action figures, and various Wing Commander audio soundtracks, posters, books, and shirts. One of our grand prizes will be a replica Prophecy-style flight suit custom fit to the winner. The party will be held online in #Wingnut in just three weeks. It should be a major blast and fun for everyone who comes! 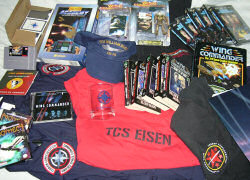