Report from the Swedish Convention

David Bohlin is back from the scifi convention in Sweden, and he has pictures to prove it!

We came in the afternoon, and there were still many people. The fee for getting in was 80 kr, about 11 dollars. The first thing we noticed when we came in was that Star Wars dominated. Everything from props to toys, they sold lightsabers, storm trooper and Darth Vader suits.

In one corner they had ancient weapons and clothes and another with Star Trek. Walking past that there were props from various movies such as "V," "Battlestar Galactica," "Alien" and Terminator 3. To our dissapointment there was no Wing Commander corner or things whatsoever.

We have come to the highlight of the convention. I stood there for a while thinking if I should get an autgraph or not due to the 21 dollar ticket. To get an autograph from John Rhys-Davies was 28 dollars. Even though it's a chance in a lifetime, my economy spoke against. But seems I couldn't resist, and before I came to him some LOTR fans pushed their way in the queue and Mr. Davies' first comment was "Bad Hobbits." :) When it came to my turn, I gave his assistant my camera, Mr. Davies signed the pic and looked at the other fans standing in line and said, "I know I'm the slowest writer in the world, but my photographer is even slower."

I must say maybe I demand too much, but it wasn't much impressive, but at least I got photo and autograph from "Paladin." ;)

The lack of Wing Commander merchandise is understandable. We usually have to bring that party. But meeting Paladin is worthwhile on its own! Conventions are difficult things to implement. Half of the fun is hanging out in such an environment with your friends. 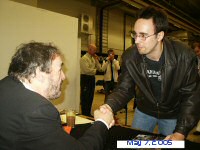 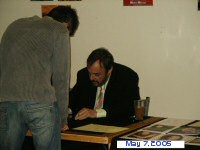 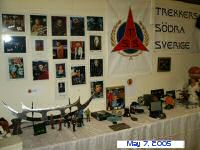 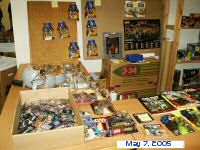