It's been a year since we've goten an update on Corsair(pilot)'s Animated Series Project. It looked great back then, and Corsair is still working hard on it. He's released three promo shots to let everyone know the project is still in the works. 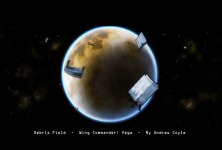 The original version of the script called for a very nice montage of the Battle of McAuliffe as the opening sequence. It didn't take very long to realize that this was just not feasible if I ever wanted to actually finish this thing, but by that time I had already done the background for this image, and so it was kept in as a single shot. The aftermath of the great battle. The final version will have much more depth and scope.

As the script for the pilot episode stands, you won't actually see the Kilrathi, but I developed their look anyway. The idea was to go with the "big cats" personified. This one was the Siberian tiger, and is intended as a hardened lower-class warrior.

What you see here is very unfinished, but it conveys the style of the CG being used for the project very well. It originally was intended to just make a cameo appearance as a beaten up version in the debris field shot, but it turned out much too well not to use.

Most of the year has been spent attempting to refine the 3D CG style and establish a unique visual presence. Some people expressed that this earlier work was too cartoony, and when placed with the subject matter of the script, I agreed. So a more serious, mature looks was worked out.

You can provide feedback at Crius.net here. The original shots of the project are in our Archives.