Casual Photos On The Set Of Stealth

After we reported about Stealth starring Josh Lucas last week, Rick Salemi dug up some navy file photos taken on the set of the movie. Lucas, who played the test pilot "Flash" in Wing Commander 3, will once again be portraying an elite pilot. The film was partially made aboard the USS Abraham Lincoln and USS Carl Vinson. The cast spent time aboard the aircraft carriers and signed autographs for the crew. 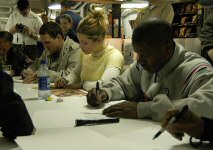 If you go to www.navy.mil and type "Stealth" in the search box, you'll come up with a bunch of images from the movie. Some of the fighters and some of the camera crew and a couple of the other stars. Note these are NOT the PR images that the distributor will release, but military photos.