akula65 tipped us off about Space Combat, a free space flight simulator by Austin Meyer of X-Plane fame. X-Plane is renowned for its realism in the flight sim area, and its creators have created Space Combat for free to test out some basic physics principles in space. The program is available here for Windows, Mac and Linux and clocks in at just a few megs. 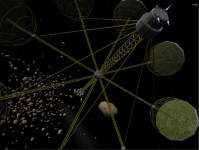 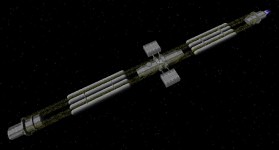 Could the X-Wing really manuever like that? Need the Imperial Star Destroyers really be so LUMBERING? What would it be like to fly a Star Fury? How should a vessel of a given mass, size, and thruster power REALLY handle? Enter Space Combat, a space simulator where all of the laws of physics are accurately applied to your vehichle.

It doesn't seem that there's any actual combat to be had, but if you liked Microsoft Space Simulator, then this should be fairly entertaining for a while. Since there isn't much objective work to do, in the words of this old Space Simulator review, after a while you'll need to just "go play Wing Commander." Space Combat is pretty neat for a free experience, and I'd like to try out the new X-Plane at some point as well.