We have an interesting artifact to share today! Former Origin designer Billy Joe Cain sent along pictures of an awesome little collectible that was apparently made in small numbers for Chris Roberts' Strike Commander. It's a 4.5 inch long F-16 replica with custom Strike Commander decals on the wings. The fighter's currently listed on eBay for a pretty spendy starting price north of $2000, but the proceeds go to benefit the REEF program that combats human trafficking. If there's a wealthy benefactor out there who's also a big Strike Commander fan, now's your chance to do some good! Find the auction page here. 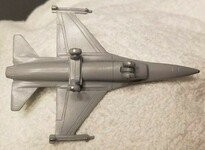 Have you ever seen one of these?

I think there were only a few of these custom made for the team, but I don't have confirmation yet.

The price is insane, but it's to raise funds for our anti-human trafficking nonprofit. We start high and drop down. The opposite of an auction, but the price usually gets to the right place! And people can make offers! :)