It's not every day that we get to directly follow up on a twenty-two year old news post, but back in 1999, AD reported that the June issue of Film Score Monthly would have a review of the Wing Commander Movie Soundtrack. We're a little bit late, but here's that article! They give it three stars, which isn't bad for people whose job it is to professionally critique movie film scores. 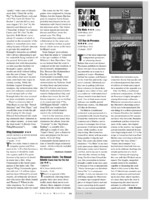 We've previously reported on a neat development diary interview that they posted with George Oldziey in the January 1999 issue. And can we take a moment to appreciate the amazing gem that FilmScoreMonthly.com is? They don't seem to have changed their website format and layout much since February of 2001, yet they still make regular updates to this day. It's web design after our own heart. You can find decades of their back issues meticulously maintained here.