One of the many stars of the recent CIC Birthday celebrations was ODVS' effort to drastically enhance and remaster the footage from Wing Commanders 3, 4 and Prophecy. Since they turned out so well, fans naturally asked when they might expect a similar update to the Privateer 2 movies. That led to some tinkering which has already resulted in a couple of example clips! There are some challenges, of course. The best currently available footage leaves a lot to be desired, so his AI/neural net techniques don't have as much to work with. ODVS asked below whether these types of results are worth going through the rest of the cutscenes or if he should hold out for better source material becoming available. After checking out the previews, hit the comments link below to weigh in!

Well, for some reason I promised to look into remastering the Privateer 2 in-game FMV during the CIC Birthday party (I'm sure excessive amounts of beer had nothing to do with it) - and boy, I had no idea what I was letting myself in for.

This one's going to be... challenging.

I've once again used DAIN to increase the frame rate and Topaz Video Enhance AI to upscale the video to 1080p. However, there's no DVD source material like there was for Wing Commander IV and Wing Commander Prophecy - and the footage ripped from the PC CD-ROM version of the game doesn't play as nicely as the footage from Wing Commander III on the Playstation.

While this comparison shows a definite improvement over the source footage, it doesn't exactly look good. I'm going to have to do extensive experimentation and refining of my processes.

If anyone out there in the community has better quality source footage, I'd love to get my hands on it. Sadly, the VHS rips in the CIC Holovids don't help matters much. The problem with upscaling from analogue sources is they're too fuzzy - you end up with something that doesn't look any better than just using a standard non-AI BiCubic upscale.

As I say, this one's going to be a challenge...

And on to experiment number two, which I do think looks quite decent:

Well, I switched to a different AI model in Topaz Video Enhance AI:

While it has gleaned some minor improvements, I still don't think it looks that great. The major hurdle here is that the source video is actually even lower quality than WC3 PSX: only 130p at 12fps. Until there's a major improvement in the technology or someone manages to rustle up some higher quality footage, I think this is as good as it's going to get. So, I thought I'd open this up to the community:

What do you guys think? Is it worth forging forward with a full pack at this quality, or should I wait until it's possible to do a better job? Personally I'm leaning towards the latter, but I'll move ahead if there's enough interest. 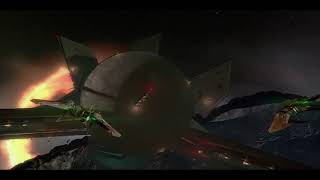