Before Mankind Was Locked in a Deadly War

Shot97 has snapped a fun preview from a 1990 edition of Dragon Magazine. At this point in time, the game was still sporting its Wingleader title after Squadron was nixed due to potential copyright concerns. Ultimately Wing Commander was selected over all. I love how the Kilrathi are called "vicious militarists" and the Friend or Foe missile is held up as a "deadly" weapon. And thirty years later, we're still trying to make ray tracing a thing! 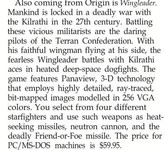 Also coming from Origin is Wingleader. Mankind is locked in a deadly war with the Kilrathi in the 27th century. Battling these vicious militarists are the daring pilots of the Terran Confederation. With his faithful wingman flying at his side, the fearless Wingleader battles with Kilrathi aces in heated deep-space dogfights. The game features Panaview, 3-D technology that employs highly detailed, ray-traced, bit-mapped images modeled in 256 VGA colors. You select from four different star fighters and use such weapons as heat-seeking missiles, neutron cannon, and the deadly Friend-or-Foe missile. The price for PC/MS-DOS machines is $59.95.