EmuMusicFan was recently inspired by an old forums thread to delve into a largely unexplored aspect of the Kilrathi culture, its music. He's put together several tracks that are heavily inspired by Kilrathi themes to add to the atmosphere of his interactive graphical novel. The first track gives off major WC2 Kilrathi vibes. The second and third need a little context to understand how they'll fit in, but I'm excited to see and hear how everything comes together!

This track is used in my visual novel as the BGM of Imperial Court Conference at which the Empire decided to wage war upon Terrans. Honestly though, I just wrote this track to have a quick BGM. But after the draft came out, I felt it was acceptable and could do the job of atmospheric rendering.

This is actually a BGM I wrote ten years ago for a fan fictional Phoenix Wright - Ace Attorney story, and the form is a reference of Phoenix Wright Cross Examination Moderate BGM, but it is my original work. After remixing, it is now used as the BGM for the Imperial Military Meeting episode of the McAuliffe ambush. 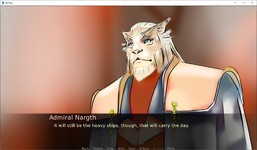 The title of the track is taken from a line by young Jukaga in Action Stations:

"Yes. Strange, many of his maxims of war are nearly the same as the writings of Xag. Yet there is much of their writings I find odd. The poets of their first global war are filled with disdain for war and seem like the ravings of old widows. But so much of their effort has in one way or another been war, either real or symbolic."

Fan fictional background story: She is a mother who could not be accepted by her own hrai anymore because she persisted in following a warrior of another hostile hrai. With the warrior's death in battle, she had no hrai to live in because this warrior's own hrai rejected and even hated her, but wandered with her female cub. Once she arrived a planet which was just attacked. The chaos caused by the raid separated a newborn male cub from his birth mother, so she adopted the cub and then settled in a noble-owned livestock-breeding planet. 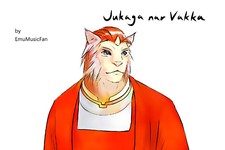 Time flied... In one year of Terran calender early 2660s, as the war continued, she and the two cubs, together with the other poor Kilrathi here, could only eat some simply cooked low quality meat left over from the livestock hunting industry to get by. One day, the cub got information that the hunting ground was holding an event similar to livestock mustering. He knew it was picking up potential recruits from the bottom class poors, but all he cared about was the prize for the top 10 this time: owning the livestock. He was doing well, making the top ten. While some of the other winners couldn't even resist enjoying their tasty prey on the spot (finally, fresh raw meat and blood), the cub just took the prize home and tamed it, regularly drew some blood as nutritional supplement for his foster mother and sister.

However, when the foster mother saw him return with the livestock, she was very worried that he would be taken away for showing his talent, or even sent to war. The cub was very confused by his foster mother's strange thoughts. At this time the foster mother explained nothing to him, but went outside and sang a song....

About the song: It's not a war song, nor is it a typical melody celebrating war heroes. It's just a folk song sung by females to males and other family members, and perhaps a sort of thing despised by mainstream Kilrathi Empire culture.

It is still a draft, so please forgive the overly simplistic harmonic texture and arrangement as well as passage articulation. The piece is divided into two themes with two variations on each theme. I haven't written lyrics to this song yet. If any of you are interested in lyrics, that would be really appreciated.