Tune in Thursday for ALL WINGS CONSIDERED 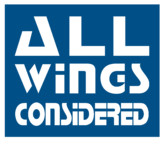