Gotta Have it All!

We recently reported that Wing Commander SNES artist Mike Winterbauer had launched a Kickstarter to create a physical portfolio showing the creation and use of his cover painting. We're happy to report that the $500 funding goal has been reached... and then some! As of this writing, the project has already brought in pledges for over three times the original goal. Congratulations to Mr. Winterbauer and good work to the Wing Commander community.

One of the first questions about the campaign was: how can I get EVERYTHING? To that end, he has added a new "Ultimate Wing Commander" pledge level. For $230 you get the book, the metal sign, the magnet, the six prints, the art card, the canvas print and the giclee print! If you love the Wing Commander SNES painting as much as we do that's a heck of a deal. You can join the campaign or adjust your pledge here. There are still three weeks to go... so who knows, maybe we could hit that $6,000 stretch goal that gives an additional art card to every backer! 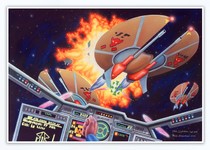