Adm_Maverick has shared a few more images of his cool papercraft Tallahassee cruiser. His new version is significant bigger than the original, and these new photos provide a good comparison to show off the scale. It might not look like much yet, but the structure that exist has pretty good geometry. Some of his longer term plans to add engine glow and other effects sounds really neat too! 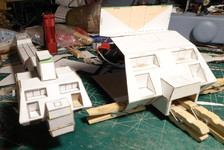 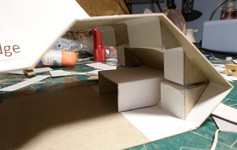 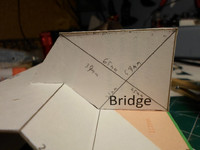 I think this shot makes a good effort at showing the size difference. The prior version is about 11" long (show on the left) while this large version will be abound 24" long. Seeing the fully assembled smaller verison, alongside the partly assembling engineering section for the large version I think helps show the difference really well. I've been including measurements in the parts as an element of planning so I can go back and develop new details, design new parts etc. As an example, I'm thinking about how I can build the engines so that they are A) lighted and B) have a distinct structure to the glow when I get around to building the finished model. Knowing that the smaller engines are 12mm by 12mm helps me keep track of sizes and area to work with.

This is an an example of something I should have thought about when I was laying out the parts for the flight deck, but sadly I did not. What I could have done is built up the internal structure of the flight deck to support the forward section of the engineering section. Oh well, this is why I'm doing this in cardboard. Try, screw up, understand, and develop.