PC Gamer seems to be on a bit of quasi-nostalgic kick. They're not exactly retro articles, but like last month's Best Space Games piece, their new story on the Five Best Years in PC Gaming mixes a bit of new and old. The oldest year in their rundown is 1993, which was as good a year for games as it was for hip hop music. Turning 25 this year are Doom, Masters of Orion, X-Wing, Frontier: Elite 2, Ultima Underworld 2 and Wing Commander Privateer, which was coincidentally also the only WC game on make the other list as well. I think you might be able to make a case that there were better years for Wing Commander overall, but we'll take it. Check out the full article here. 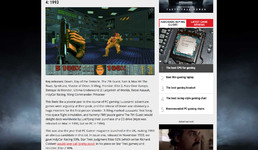 Here's the thing about PC gaming: every year is great for one reason or another. Just for fun, though, we let the PC Gamer staff select the best years in PC gaming, through a vigorous process of putting a line next to the years they wanted to vote for, based on the games that were released in those twelve months.

The results below definitely reflect the respective ages of the team (most of us are in our thirties), so it's worth keeping that in mind. This process offered an interesting at-a-glance perspective of how quickly PC gaming changed, and how certain types of games would come and go. Let us know your choice for PC gaming's best year in the comments.