Homeworld Mod Gets Even Smarter

L.I.F. has been making great progress with AI recently, and this helps put the next release of the Homeworld Remastered Mod on track. In particular, they're getting good at firing the game's new missiles appropriately, and ships now operate in formations better. He's also got a funny story about how minor tweaks can produce unintended consequences. He accidentally gave freighters a slightly higher value than anticipated, and the result was that the AI thought it appropriate to launch waves of medical transporters at opposing strike fleets. See the ensuing melee below!

Ha! Let me show you how important it is to properly set the AI values. The Scout Transports got a combat value set a bit high, so we got a redux of the Battle of Earth, with a bot launching an offensive with... a convoy of medical transports.

The other bot simply decloaked a Prowler special ops corvette and started having fun with the hapless doctors (and it built a destroyer which is coming in hot too). Note how the AI now use formations with its ships. That code from the other team is really good. 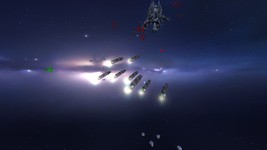 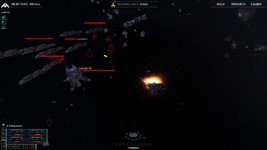 Long story short, the new version is advancing pretty well and as soon as I can guarantee a working system for single player, I will integrate it to the Secret Missions factions then release the whole thing. Just, I might lose some time from tomorrow onwards, because World of Warships will have the public Beta of French Battleships, and I've been waiting for years to cruise with Richelieu. :)