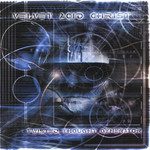 And the record for most time to follow up a news story goes to... us! Way back in 2000 we ran an update on a newly-released Velvet Acid Christ CD which was said to contain hidden mp3 files from another abandoned project... one of which sampled speech from Super Wing Commander. At the time, I promised I would try and find a copy to learn more. Seventeen years later, I remembered to do just that! The CD in question (now an antique) does, indeed, include files visible when loaded onto a PC: 11 mp3s. An old-style README explains:

Disease here. Let me explain, this is an old release, very old. it's a gift, for free to all the hard core fans who are after ultra rare Velvet Acid Christ, i think maybe a total of 10 people have and or heard Dimension 8. So from me to you (hope you like). We wrote all of this heavily intoxicated on weed, lsd, and other tame mind expanding drugs. fuck all the hard drugs, they destroy you and take your soul, thus is the subject of much of twisted mind generator. Gear used on this old stuff: mks-50, dr 660, peavy dpm 3, juno 106. not much at all. Peace to Gary Slaughter, he and i wrote all this back in 1993 to 1994. These mp3s are free, you do not pay for any of this, you pay for twisted mind generator. upload, and download this material as you see fit. I pulled these off of analog tape, so please forgive the sound quality. 224. joine the 160 + mp3 generation. fuck 128 and lower. do not pirate, if you like something buy it. artwork is cool! so is having an original.. This is Velvet Acid Christ's Material, please do not rip, take credit, change the song names. Leave in original form if you do decide to upload..

What is funny, when we did this, djs, and radio people who heard this wouldnt play it, saying "its to weird, changes to much). Funny how this has become the vac trademark, changes, and weirdness. Now we sell thousands and thousands of CDs worldwide. Critics, eat my shit. Dimension 8 is by no means up to par with the VAC that has been released, that is why it is free. For the hard core. I like it when i'm on drugs. that is why we wrote dimension 8.