Bankruptcy, Space and the Great Games 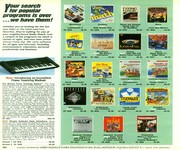 RadioShack, the lion of the American strip mall, is dead. Once a leading electronics retailer, RadioShack fell on hard times in recent years as buyers shifted in favor of larger superstores and then e-tailers and this year declared bankruptcy. Of special interest to classic computing enthusiasts, they are holding an impressive series of auctions that include vintage items from their long history once stored for their historical office.

But what does Wing Commander have to do with RadioShack, a store best known for selling batteries, coaxial cable and colored diodes? Starting in the 1980s, RadioShack championed the Tandy, their own line of (mostly) IBM PC-compatible computers. And to go with those computers they, for a time, became a major force in the world of buying electronic entertainment software.

How does that make them an important player in the Wing Commander story? To explain that, we'll first correct a common misconception: a particular video game's fate is often decided months or even years before it ships based on the interest of software buyers. These buyers are the salesmen and women who represent major companies like Gamestop, Target, Walmart... and, once upon a time, RadioShack. Trade shows like the Electronic Entertainment Expo (happening as this update is posted) are not primarily to showcase new games to the public; instead, they're to convince a small group of buyers to bet on them. These sales to retailers impact budgets, development timelines and more before a project is close to finished.

In 1992, RadioShack (and its Canadian sister ship, InterTAN) were eager to stock games that would make their Tandy PCs look great. In those days, Origin's marketing team, the Bulldogs, would travel the country to meet with buyers, show off demoes and try to convince companies to purchase Origin games for resale. After several years of trying to make a deal, Origin had an impressive success pitching Strike Commander. A 1992 Point of Origin announces the good news:

First and foremost, kudos go out to Tandy Tamer Karl Kabler. After two years of pitching, charming, selling, apologizing, pitching again, selling again, apologizing again, pleading, waiting, worrying, pitching again, schmoozing and pressing, he ﬁnally got to closing. Karl rounded up that ever— elusive Radio Shack order for Strike Commander to the tune of 10,008 units (and they’re non-returnable, too). What’s next? He’s already working on the Tandy buyer for Wing Academy and Silver Seed.

So RadioShack sold Origin games; so what? That's where the story gets interesting... and where we lose track of it. The following three pages of documents are among the most fascinating I've ever uncovered. They are a snapshot in time from 1995 listing every 'SKU' Origin has sold since the 1991 purchase of Origin. Each lists the internal catalog number ('EA number') which you can find printed above the barcode on EA-published books and games.

Notice anything? That's right: the Radio Shack and InterTAN sales have unique SKUs! Which suggests that they likely had unique packaging and may even have had alterations to the games themselves to better support the Tandy. With this data, we can also follow the story a little further:

It appears that Origin had another success with RadioShack shortly after Strike Commander, selling a major order of copies of Shadowcaster for the Tandy. Other than that, the sales are largely Canada-specific and only a few hundred of each game were published. Two Wing Commander games appear on the list and we don't have either in our collection. Did you buy Privateer or Academy at a RadioShack in the 1990s? We want to hear from you!