In honor of April 20th, here's a quick rundown on some of the recreational drugs of the Wing Commander universe! Blaze up some Arakh Leaves or swallow an Elysium capsule and let's get started...

Brilliance is probably the Wing Commander universe's signature drugs. Introduced in Privateer as a commodity available only at pirate bases, Brilliance is frequently namechecked as 'the' narcotic of the 29th century. Unit cost averages about 200 credits each. Most famously, Privateer features three missions in which the player is asked to run Brilliance from Oakham pirate base for Tayla; if you refuse, the game is over and you can never earn the Steltek gun. As hard as it is to imagine today, this upset a number of fans in 1993 who were not happy to be made to play a 'drug smuggler!' To address the feedback, Origin left a second set of Brilliance runs in Righteous Fire as optional missions.

Ultimate is Brilliance's much harder cousin (and likely named after Wing Commander's famous sister series of CRPGs.) Like Brilliance, Ultimate is available only at pirate bases... but at a much higher cost, averaging around 1,000 credits per unit. It does not appear in any of the scripted missions. Militia and Confederation patrols that scan Ultimate aboard your ship will attack on sight.

Welcome back to one of the oldest Wing Commander message board topics: smoking in WC is illegal?! The answer is yes, tobacco is considered contraband in Privateer and Confederation Broadswords will happily sink your Orion for transporting it... but it's also claerly smoked in cigar form in mixed company by Hunter in both the original Wing Commander and various novels. Perhaps a case where only transporting it is considered a felony?

The premiere drug of the Tri-System, Warp Steroids are all over Privateer 2: The Darkening. Warp Steroids (or "WaStes") are taken by humans hoping to improve their physique... with the unfortunate potential downside that overuse can shrink or collapse body parts. The Tri-System seems to be much more lax about drug use: versions of Warp Steroids are manufactured and advertised by large companies (including PumpUp! and Bulge-U-Like) and are not considered black market goods even they are repeatedly referenced as being typical 'party' drugs (used by rock stars and the like.) Perhaps anyone who wants a real trip in the Tri-System needs only to visit Karatikus... (Note that there are illegal drugs in the Tri-System; you are occasionally called upon to destroy pirate shipments of narcotics in booth missions.)

Another product of the Tri-System, Elysium was invented and produced by a company called Stapleton Brothers. The drug returns the user to the cognitive state of a seven-year-old, providing a sense of innocent joy for several hours. It is distributed in capsule form, taken two at a time. In the Tri-System of 2790, Elysium was sold on the open market with an MSRP of 35 credits per capsule. Elysium also made its way to the Terran Confederation, where it was available illegally (as of 2701.)

Happy Death originates in Action Stations in an offhand remark by Senator Jamison More about how addiction is an epidemic that needs to be addressed in the pre-war Confederation.

The Kilrathi enjoy a good trip, too! Arakh, introduced in the novel Freedom Flight, is said to be "like catnip" for the Kilrathi. Arakh leaves give a calming effect and are either chewed or infused in a drink. Kilrathi society does not outlaw the leaves--Ralgha even chews them on the bridge of his Fralthi--but it does seem to judge those who over-imbide and become intoxicated from them.

It's not clear exactly what Kilnip is, but the name certainly suggests it's intended for the Kilrathi! It's one of several illegal narcotics listed in the 'Life at Port Broughton' article in Star Soldier, the Wing Commander Arena manual (also mentioned are many of the above: Brilliance, Ultimate, Elysium, Warp Steroids and Happy Death.) 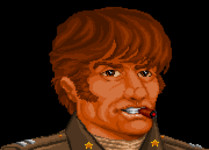