Last week, we showed you how the developers behind the 1995 Wing Commander CCG used a single painting to create two different cards. Today, we'd like to share another example by walking you through the incredible art of Alan Gutierrez. Mr. Gutierrez is the extremely talented artist behind much of the game's 'space art,' used for Modifier and Nav Point cards; he also painted several unique Luck cards. In total, he provided fifteen paintings for the game which were used for a whopping twenty four cards!

The first and most visible duplication is in Nav Point cards. Nav Point cards were not part of any deck and were instead part of the playing field. Every game started with players laying out five of these cards (or more, in some variations) between their carriers. These cards featured beautiful environmental space art such as planets, stars and nebulae without Wing Commander-specific ships or characters. There were a total of ten designs, five by Alan Gutierrez and five by Robert Daniels. Each card had a Greek letter, harkening back to the wing assignments of Wing Commander I.

As the game needed to be playable using any sealed starter deck, these cards were printed with both Terran Confederation and Kilrathi card backs. To make sure every starter deck included at least five, they were printed with the game's commons (as a side effect, Nav Points would show up in booster packs.) The front card artwork is identical for both factions and there is no impact on gameplay, but each Nav Point appears twice in the card list. Carriers were also printed as commons, and were also reprinted on the starter boxes to make sure every player would have a home base! Here are Alan Gutierrez's five (or ten) cards: Alpha, Beta, Gamma, Delta and Epsilon:

Next, each faction in the CCG had a set of blue-bordered Luck cards. The official rules describe Luck cards as follows: "Luck cards represent the effects of karma, bio-rhythms, bureaucracy, human natue, a cat's nine lives, and fate. They may affect any of the other cards, subject to the text on the card." These cards can be played at any time during the game and are discarded after use. Players are not allowed to have multiple copies of the same Luck card in their deck.

Luck cards were generally unique in terms of art, though in several cases they were duplicated from a mechanics standpoint so that each side could have the same ability. For example, the Confederation and the Kilrathi both have cards that turn pilots into traitors or disable them for a turn for drinking too much. Alan Gutierrez's work includes two of these in the form of four paintings: CAPTURE PILOT and RECOVER PILOT images for each faction. It's interesting to see these grouped together; you can see how all four are thematically connected (note also a great attention to detail in how the space suits match from card to card.)

Mr. Gutierrez painted two additional luck cards, SKILLFUL USE OF MISSILE DECOYS and MAGNUM LAUNCH for the Terran Confederation. These are distinct paintings and each is worth a closer look. In my mind, MAGNUM LAUNCH remains the signature piece of artwork for the game; it's both unique and captures the spirit of Wing Commander perfectly. Then the missile decoy card features an outstanding Thunderbolt VII front-and-canter. There are no directly equivalent Kilrathi Luck cards in either case.

Finally, we come to Nav Point Modifier cards. These were cards that the player could summon during the Mustering Phase and place on any Modifier-free Nav Points. As the official rules explain, "Modifier cards include natural phenomena, such as asteroids and enemy obstacles such as capital ships and mine fields." The roster of Modifier cards included capital ships, which used renders from Origin and varied from faction to faction, and four 'space weather' for each cards painted by Alan Gutierrez. Here, again, four paintings were used to represent eight different cards: two each of NEBULA, MINEFIELD, ASTEROID FIELD and PULSAR SNARLS COMMUNICATIONS. For the Nebula card, you can see that each side's card was identical save for the logo.

The same is true of the Pulsar Snarls Communications card. What makes this card a little more fascinating is the fact that Alan Gutierrez has posted the original painting to his DeviantArt site, giving us a better-than-ever-before look at the work behind these two cards! His comment on the extremely piece:

Commissioned by Margaret Weis and Tracy Hickman 1996, for the card came "Wing Commander"
I did about 10 small illustrations for the card game, with various celestial effects, that might affect the outcome of the game.
This was the only one I ever scanned from the original art.
It's been many years, but my understanding is that a collapsed star-burnt out and becoming more dense, emits electromagnetic radiation (the blue streaks) and, spins very fast, with the light (the eruption in orange) "pulsing" as it spins.
There may be other more accurate depictions, but this was done just for fun, so I'm not interested in the specifics. Just the wonder of outer space...
Gouache on masonite, 7" x 10" 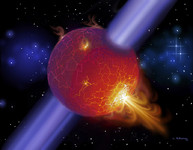 It turns out Mag Force 7 had one more trick up their books for keeping the art budget down: cropping different parts of an image to represent it differently for both factions. Check out the Asteroid Field modifier card. This is one of those small things that has been looking us in the eye for years but that you rarely have cause to pick up on!

For the final painting of the set, the same trick is used. Here, Mr. Gutierrez has scanned the original artwork so you can see exactly how it was cropped to create two different views of the same Minefield!

Finally, we are able to answer an age old question: what do you get when you mix it all up? The answer is that you get a (sort of) new piece of Wing Commander art! In December of 2016, Alan Gutierrez digitally updated the Minefield painting to include his fantastic Thunderbolt from the Skillfull Use of Missile Decoys card. You can see the original post on his DeviantArt here. 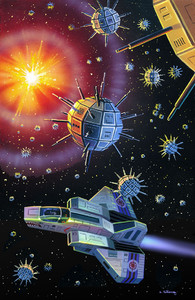 From the Wing Commander card game, commissioned and published by Tracy Hickman and Margaret Weis, 1995
This is the combination of 2 traditionally painted works, "Minefield", and "Skillful Use Of Missile Decoys" from the game. Since I had the original scan from "Minefield", I digitally added the ship (unscanned and had to be digitally restored from the printed card) to present this new variation.
Top half gouache on Masonite.

All card scans are courtesy of Jetlag. You can find much more of Mr. Gutierrez's incredible work at his DeviantArt page.