In 1994, Electronic Arts hit on a sales trick that has since become commonplace: re-release your recent back catalog as budget 'classic' titles using simple packaging and digitized manuals to lower printing costs. The original cost of producing these games could be further amortized, ultimately helping further support the ever-growing game development budgets needed for new titles to stand up. You could call it GOG's great, great grandson!

Initially priced between $7.99 and $14.99 each, the first wave of 'Electronic Arts presents CD-ROM Classics' contained a host of mid-1990s Origin titles alongside other EA favorites such as Chuck Yeager's Air Combat. The idea was a hit, and these and other Origin classics would go on to be re-released in several series over the years, with some Wing Commander games still being available at retail today! A simple collector's guide to these releases follows.

Black Series: Also known as the original or black series, these classics came in a one-piece cardboard package similar to Origin's add-on disks. Each box included a printed install guide booklet and a CD-ROM containing the game and digital copies of the original manuals. The black series were released in several waves over multiple years. Wing Commander games represented are Wing Commander II Deluxe, Privateer, Academy and Armada. Other Origin games in the black line included Strike Commander, Shadowcaster, System Shock, Ultima Underworld I & II and the Complete Ultima VII. The Wing Commander Academy release is among the harder classics to find.

Gold Series: In 1996, Electronic Arts began issuing the CD-ROM Classics in gold bordered boxes. These versions came in more traditional two-piece boxes made of a heavier cardboard. In some cases, these versions of the games were updated with scripts to assist in running older titles using Windows 95. Wing Commander II Deluxe, Wing Commander Privateer and Wing Commander III were released in this series. Other Origin titles included the Crusader: No Regret, CyberMage, Bioforge, Complete Ultima VII, Ultima Underworld I & II and Ultima VIII: Pagan. Completists take note: the gold series version of Privateer's cover promoted a $10 rebate for the newly-released Privateer 2: The Darkening in some printings!

Gold II Series: The second gold series of EA classics began in 1997 and ran for several years. These releases included slightly larger two-piece boxes distinguished from the earlier gold series by having only a single band at the bottom of the game box art rather than a full border. The only Wing Commander games released in this series were Privateer and Wing Commander III. Other Origin titles included the Ultima Collection, Ultima VIII: Pagan, Crusader: No Remorse and Jane's AH-64 Longbow. Other release continued into the 21st century in a similar box design dropping the 'CD-ROM' from the label; no Origin games were reissued this way.

Silver Series: The Silver Series of EA classics launched in 1997 and is, improbably, the one you are most likely to discover in stores today. These minimalist releases included only a single, silver-bordered jewel case, designed for sale in the walls of budget video game options at places like Office Depot. Three Wing Commander games appear in this format: Wing Commander II Deluxe, Academy and Armada. Keep an eye out! 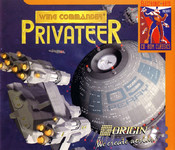 Orange Series: Meanwhile, in Europe Electronic released two equivalent lines of CD-ROM classics. The first was the orange' series, a which were released in individual jewel cases. These were traditional 'English/French/German' releases with all three languages represented on the back of the box. Three Wing Commander games were included: Wing Commander II Deluxe, Armada and Privateer. Other Origin games represented include System Shock, Crusader: No Remorse, Strike Commander, Ultima Underworld I & II and the Complete Ultima VII. Depending on the country, a different install guide was included (making a total of nine total versions for anyone interested in catching them all.)

Blue Series: While the later, multi-disc Wing Commander games were generally not released as classics in the United States, they were re-released in Europe. 'Blue' packaging includes a smaller generic two-part box with a slip cover for the relevant game. Like the orange jewel cases, these are English/French/German boxes with region-specific manuals in each country. Most impressively, these versions included printed manuals rather than PDFs! FOUR later Wing Commander titles were included: Wing Commander III, IV, Prophecy and Privateer 2! Other Origin games include System Shock, Bioforge and Ultima VIII: Pagain.

Did we miss any EA classics? Have you collected them all? Let us know on the forums!