Arraen has posted some new images from his starship combat tribute mod. He's retextured two of Klavs' destroyers to act as workhorses of the Confed and Kilrathi fleets, and both of these are quite solid. In order to create a counter to the Venture, he's also beefed up the Jalkehi to act as a type of light corvette. The ships are arranged in the game's built-in ship viewer, which has a pretty cool format. We're looking forward to seeing these in action soon! 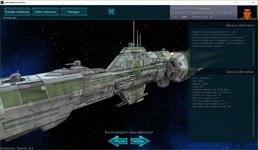 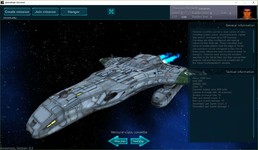 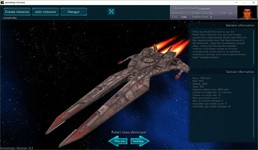 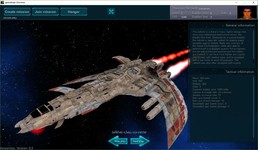 Ok, finally I finished with updating Klavs81's models, adding textures and splitting them onto pieces such as turrets, missiles, bridges etc. For now I have 4 ships ready: the Venture, Southampton, Jalkehi and Ralari.

I'm trying to keep the same classes for both sides. Unfortunately, Klavs81's pack doesn't contain any Kilrathi corvettes. So I decided to "upgrade" the heavy fighter Jalkehi into a corvette class. Anyway she has similar tasks and equipped with jump drive. What do you think, guys? Also the project has a new name: Spaceships Universe. :) Since it is not a strategic game, but online capital ship simulator, I thought the word "tactics" didn't fit here.