LOAF Gets A Wicked Kilrathi Tattoo!

LOAF has further increased his Wingnut devotion with an awesome Wing Commander tattoo! He recently had a section of Kilrathi characters permanently inscribed on his collar. It's the same text that Paladin hid under his jacket in the Wing Commander Movie. The Confederation Handbook explains that this is the name of the Kilrathi slave master from his time as a prisoner of war. We don't see these letters depicted in the on-screen captions exactly as shown here, but they have a strong similarity to rest of the script created for the film. I've been listening to LOAF talk about getting this particular tattoo for years, and I'm very happy he finally made it happen! 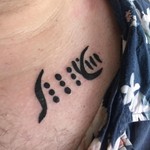 Extra bonus: LOAF's Death From Above Mobile Infantry tattoo also has a bit of a WC connection. It was worn by Johnny Rico in the movie Starship Troopers. Actor Casper Van Dien, who played Rico, had a brief cameo in Wing Commander 4 when Blair arrives aboard the TCS Lexington. Extra, extra bonus: The tattoo was designed for the film by famous concept artist Jim Martin, who LOAF recently got to meet while working on some Cloud Imperium Games business!

Those asking about the ink: I did it! Pretty painless, very happy to have made the plunge. It's Paladin's Kilrathi prison tattoo from the Wing Commander movie! The scene that shows/explains it was cut from the finished movie; I recently tracked down the set photographer for a clear look! It felt like a good way to honor this most interesting current chapter of my life!

You can find more diehard Wingnuts with WC-inspired ink here and here.