There's great news from Origin composer George Oldziey. The physical copies of his Wing Commander music album have arrived from the manufacturer, and he's now prepping them for shipment. Copies should start going out over the next week for Wingnuts who pledged back in 2014. One of the most frequent questions we've seen over the last year is from fans who missed the original campaign but are still interested in obtaining a copy. The project is still not a commercial venture, but now that George has his final production lot and a better account of the costs (certain things like international shipping came out more expensive than projected), he's making a number of extra units available. Fans that donate $20 to offset the remaining costs will get a digital copy of the album, the collectible physical CD (including a digital copy) is available for those who contribute $40 and an autographed album is $60. Head over to his website to learn more! 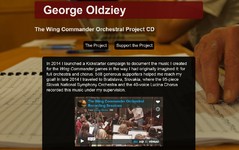 Hi guys. I just received the shipment of Wing Commander orchestral music CDs. They look and sound great! I’ll be shipping them out to the donors at the appropriate tier levels next week.