Revisit The Saga Of The Warrior King

Den of Geek has shone a light on one of the strangest cartoon crossovers of all time, The Saga of the Warrior King. In November of 1996, Wing Commander fans excited to see the eighth episode of Wing Commander Academy were treated to an odd surprise when the show was deferred for a half hour so that an episode of Mortal Kombat could air instead. What nobody realized at the time was that four different shows had inexplicably collaborated so a space viking voiced by Michael Dorn could hop through Street Fighter to Savage Dragon to Mortal Kombat and finally Wing Commander while chasing a mysterious object. There was never any promotion nor apparent reason for the bizarre tie-in, and Wing Commander fans have long regarded it as an enigmatic oddity of Saturday morning cartoon history. Author Gavin Jasper has done a good job recounting the entire tale at DoG here. For more background, check out the CIC's original writeup. 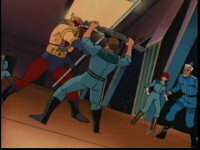 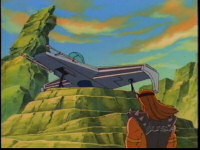 I’m going to level with you. I don’t know much about Wing Commander. Flight games aren’t my thing. I know that it’s about future space stuff where humans take on evil Thundercats via cosmic dog-fighting and the third game was groundbreaking for its use of cutscenes with real deal actors like Mark Hamill and Malcolm McDowell. That’s about as far as my knowledge goes on the subject prior to watching this episode.

There are two big things I notice from the start. First, the animation is very crisp for this era. It makes the other three shows look all clown shoes. Second, it pulls no punches. Death happens on-screen and it’s important. Enemy ships are blown up in space and it’s not like GI Joe where we see parachute escapes to assure us. Those cats are dead.

The pilot Gwen actually goes through emotional turmoil from killing and openly talks about how she loses a bit of herself every time she blows up a Kilrathi ship. That’s really unique to me. I’m so used to seeing cartoons sidestep murder that seeing the ethical and emotional repercussions talked about is mindblowing.