In all of the excitement late last month with Wing Commander joining Netflix, we noticed that the movie simultaneously disappeared off iTunes. Our theory was that it was related to Chris Roberts regaining the distribution rights and set off to investigate. But, before we could get too far, the film popped back up! You can once again pick it up in the iTunes store for $9.99. So while the entire ordeal turned into a relative nonevent, we bring it up here as a reminder to avoid disappointment later by grabbing things while you can. Even when Wing Commander disappeared from the storefront, people who had previously bought the movie retained the ability to see it and redownload it in their personal libraries. Netflix rotates through its catalog regularly, so it's still a good idea to grab a copy. The same goes for all other digital goods such as the Movie Soundtrack, Remastered WC1 Album, Wing Commander Arena, WC4 for Playstation and all of the GOG releases! The Bluray and Academy DVD sets are also still relatively common, but they're sure to be collector's items some day too. Our advice: strike when things are cheap and plentiful! 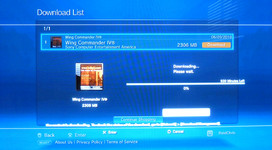