Mike Peters is a high school teacher and a huge Wing Commander fan. For an exciting summer project, he's working with his students to put together a fun film series. They've already started on the story, which will center on Colonel Halcyon and Commodore/Admiral Tolwyn prior to the events of WC1. A model Tiger's Claw has also come together very quickly in the past week or so. Based on how fast it was assembled, they should be able to build the rest of their planned fleet in no time! We're looking forward to seeing what they come up with next. You can follow the development of their project, Wing Commander Vega, at their new blog here. 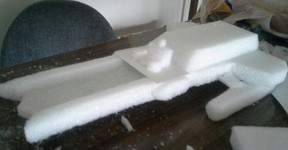 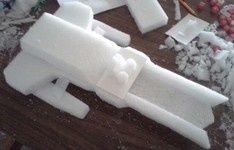 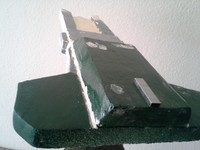 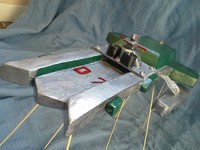 I need to make another one. She looks pretty beat up. Maybe this will be the Claw from the third season, after it’s been around the Kilrathi block a few times. Just from the things I learned from the problems I had making this one, I can make another that looks 100 times better. For example, spray paint eats through foam like xenomorph blood eats through a starship bulkhead? I nearly lost the entire flight deck. (That’s why there’s paper over it in the above pics.) After a plaster reconstruction, she was ready to receive flights again.

You get the idea, but with a gal this pretty, it’s hard to stop taking pictures. (Said in an Old-Timey Sea Dog accent!)

My film degree is 15 years old, from the days when 3D rendering was a distant dream-right up there with flying cars. When I was little, my wish-job was to work for Hasbro and write for G.I.Joe. That didn’t happen, but building this Tiger’s Claw has made me realize how much fun making my own toys IS! It is fun, but a lot of waiting. Wait for the plaster to dry. Wait for the paint to dry. Anyway, here are some stills of the Tiger’s Claw at the shipyards.