Death noticed that Dirk Loechel's massive sci-fi size comparison graphic has received a "final" update. Although it's possible that the project will never really be complete, the creator believes he's done his last major update for at least a long while. Compared with the last big revision, a number of the Wing Commander ships have been cleaned up with new art. In some cases, fan renders appears to have been used when they're relatively faithful to the games and looks especially sharp. The ships have a more uniform side view now compared to the various angles that originally populated the WC section. Some Wingnuts have pointed out the Dreadnought length discrepancy, which the author has explained at the CIC Forums. Despite that quirk, it's pretty impressive how he's captured such a variety of Wing Commander ships! 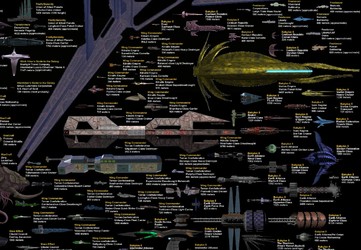 The last update. For real this time: This is the final major content update, though if there are issues I'll still fix them. I also haven't forgotten I wanted to vectorize the writing. It's still on the radar. But content-wise, I think that is about all I can put in. Also, I added the ISS. For scale. It's on top, with a yellow frame so it's relatively easy to find.

Lots of errors fixed, lots of new ships too. Well, off for now, but I'll be replying in the comments more or less regularly. Also added a few more ships and switched the Eternal Crusader for the Legate Class battle barge, which is a class ship and not a unique ship.

You can download the full five megabyte image here.