The Grikath (Wing 2/Academy TV) may have poor acceleration specs, but pilots that go chasing after one will have to face the dreaded tail gunner. Klavs' take on this heavy fighter has more jagged edges than the original and the razor-like wings look sharp enough to slice an enemy ship in half! 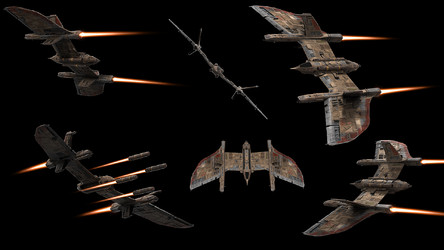 -Intercepted transmission from Grikath Vog Seven-Two, destroyed at the Battle of Vukar Tag.

This thing turned into almost a proto-Vaktoth. With a good bit of movie Broadsword thrown in for the torpedo carry system, and even some cues from Wing Commander Academy.