The CIC would like to wish another happy birthday to Wing Commander creator Chris Roberts! In honor of the day, PC Gamer has reposted a nifty interview with the man himself. In his "How I Game" Q&A, Mr. Roberts talks about his customized PC, games that he plays and his thought process behind gaming. There's also more pictures of his Cloud Imperium office, which is ringed with priceless Wing Commander posters and artifacts! I think more than a few of you will find those more tantalizing than his RAM chips... Check out the full article here. 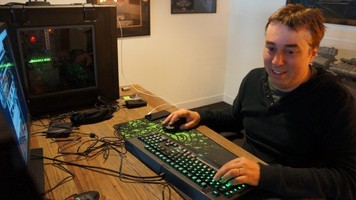 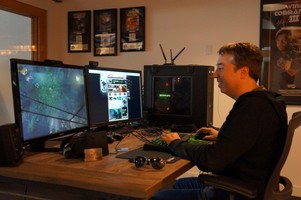 What are you playing right now?

"I like to escape into different worlds. That drives the games I make. It’s about immersion into another world." I wish I had a bit more time to play. Since Star Citizen went full throttle, I haven’t had much time. Non-PC games, I was playing a bit of The Last Of Us, which is pretty awesome, even though it’s on the PS3 hardware. It’s pretty amazing how much they’ve pushed out of it. On the PC, Company of Heroes 2. I liked the original a lot. I haven’t had a chance to play very deep into it, though. And I just downloaded XCOM, the one that was out a little while ago. I’ve been playing and checking that out. But I haven’t had a chance to get too deep into games, because the problem is, when I get into a game, I want to finish it. [laughs] That leads to a week, two weeks of being up to four or five in the morning. That’s not too good when you’ve got deadlines.

Why do you game?

I like to escape into different worlds. That drives the games I make. It’s about immersion into another world. I’m not really playing a game to rack up a high score or even for competitive stuff, although sometimes competition—like doing StarCraft competitively—is kind of fun. But it’s the immersion for me. I like to get lost in a world. I like to go and do things that you wouldn’t do in your normal life. You can see that in Star Citizen. Flying a spaceship out in the outer frontier of the galaxy is not something you’re going to do in your real life. Fighting dragons or demons and all that kind of stuff. For me, it’s an escape and an immersion into another world.

You can find a couple more shots of his desk here or here.