Klavs is back to work on some new models from the WC2 era. The first is a pretty slick Sartha. It's quite faithful to the original, but the high resolution textures, detail and firey engine exhaust give the ship a very menacing presence. While someone might get away with comparing a common Salthi to a house fly, this Sartha definitely comes across comparatively as a stinging bee. Although to be fair, Klavs' Salthi is based on the super aggressive looking SNES SM1 variant, so it's no pushover either! 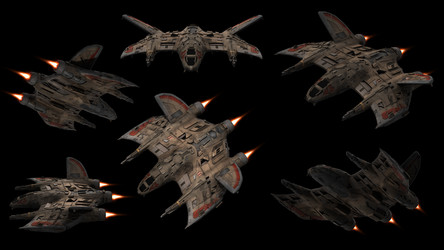 Power requirements peculiar to the Sartha meant that acceleration compensators were powered subordinate to the neutron guns. This meant that maintaining a full charge in the guns reduced the ship's ability to maneuver without burning RCS propellant. A pretty nimble little light fighter was reduced to the maneuverability of a heavy medium at best. The best Sartha pilots operated on half charged guns, and drained RCS fuel at a prodigious rate, reducing their combat range and hitting power, but allowing for greater maneuverability.

Of course, the Kilrathi (as always) figured this out faster than we did. Over Miliput, I had a Sartha pull this insane high-G maneuver, getting on my tail and just STAYED there. I let him be, figuring he didn't have the charge to maneuver that agressively AND hit me (very hard) while I worked over his mates.

Too late, I realized this guy mounted a quartet of high velocity stormfires whose minimum power requirements made Swiss cheese of my backside while that damned Sartha hung on my six through every possible evasive maneuver like he had been painted on the canopy at the factory.