PC Gamer has posted another Wing Commander article in their "Reinstall" series of classic game retrospectives. Richard Cobbett visits the frontier this time in Privateer. He does a good job emphasizing one of the most striking aspects of the game - it just feels like a real, living slice of the Wing Commander universe that the player has absolute freedom in. There's been a lot of excitement on the internet lately about Star Citizen's Hangar Module. Even Kotaku posted a thoughtful blurb on how magical it feels to own and walk around your ship, whether or not you're actually flying it. Privateer is the game that first brought that feeling to the Wing Commander series. Reading Richard's article at PC gamer brings all those old feelings back.


Priv turns twenty years old on the 23rd of this month, so there are certainly elements of the game that have aged, but its charm is timeless. The cramped cockpit of the Tarsus is a common gripe, but its tiny viewscreen was an intentional limitation that makes the future ships all the more rewarding. In today's world of fully 3D rendered environments with ultra high res textures, it can be hard to put yourself in 1993. Being able to hit F4 and look at the back door of your cockpit area provided a sense of immersion that few games could match. If you haven't picked up the GOG copy yet, note that they added Righteous Fire to the $5.99 package a little while back! 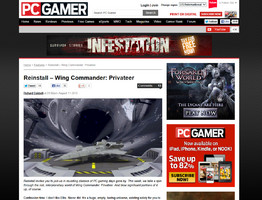 Unlike Elite, or many other space trading games, Privateer understands the importance of creating a world that feels like more than a few menu screens, even if that’s all it boils down to. Each planet type has a unique look. Every nav point you visit could be home to anything from another trader who simply signals hello, to a battle already in progress you can either take part in or afterburner straight through. The addition of a speech pack (included in the GOG release, along with the expansion pack, Righteous Fire) helps a lot here, making space feel like a much less lonely place.

Having character portraits and proper conversations does a similar job while planetside, with just enough differences that the universe doesn’t quite seem full of clones. Out in deep space, every faction has its claws into different systems, from the safe Confed-controlled trading hubs to pirate systems like Pentonville, and even a few where you’ll bump into the Kilrathi—Wing Commander’s feline baddies—whose genocidal war with humanity doesn’t particularly concern you as a freelance trader. The different factions all keep track of your kills, dramatically affecting the reception you’ll get when you jump into their sectors to carry out business.

This sense of character is something the Wing Commander series did better than any other game, from X-Wing’s very sterile aesthetics to Freespace’s stripped down “Alpha 1” callsigns and to-the-point mission briefings. Technically the trading is no more intricate than Elite’s, and the space combat little more than jousting with plasma guns.

The added details make it so much easier to pretend though, to imagine a busy universe of snarling pirates and smelly deep-space truckers. If you’d played the Wing Commander games, it also didn’t hurt that after several campaigns of taking orders and flying missions, you were now off the leash in that big wide universe, with the liberty to ignore even the scripted plot missions in favor of running a shipment of drugs past the good guys. Freedom doesn’t have to be subtle to be enjoyed.