WC vs History: What's In A Name?

I'll order Rear Admiral Dayan with Task Force Twenty-one to deploy from Tangier. She's got two battlewagons, the carrier Ark Royal, and some damned good cruiser and frigate commanders. That'll push our assets out there. Hell, if it's a typical Cat fleet, we'll have more than double their strength in battlewagons. If they come in, we'll put a real twist in their tails.

The TCS Ark Royal is referenced in three Wing Commander products. She was part of Admiral Dayan’s Task Force 21 in Action Stations. She appears near the end of Fleet Action as one of the two carriers, the other being the TCS Lexington, brought online to fight in Sol during the Battle of Terra. She’s also one of the carriers found in the CCG where she is home to the Marine fighter squadron, Hell’s Archers. It’s unclear whether it is the same carrier in all three sources, but it is a good possibility. 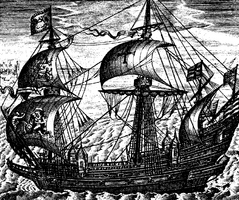 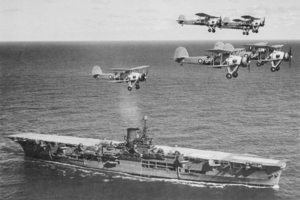 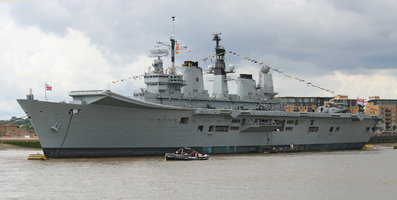 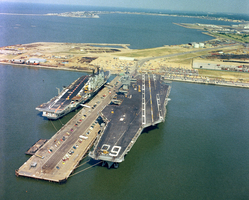 The five ships to bear the legendary name Ark Royal. The last image shows the last Ark Royal berthed next to USS Nimitz. Ark Royal is on the left.


The original Ark Royal was a ship originally ordered by the famous Englishman, Sir Walter Raleigh in 1586. During construction, the ship was purchased by Queen Elizabeth I and command was given to Lord High Admiral Charles Howard. Ark Royal served as Admiral Howard’s flagship during the campaign against the Spanish Armada in 1588. Her career spanned 50 years and numerous battles before she was lost in 1636 when she hit her own anchor while being moved.

The fame of the original Ark Royal led the Royal Navy to name four other ships in her honor, all of which were aircraft carriers. The first was a merchant ship that was converted to an aircraft carrier during the First World War where it saw service in the Mediterranean during the Gallipoli campaign. The second was a purpose-built carrier commissioned in 1938 when the interwar naval treaties were still in effect. She was first carrier where the hangar and flight decks were an integral part of the hull instead of additions to it. The design limitations of the treaties had produced a number of design flaws that contributed to her loss at the hands of U-81 in November 1941. The third Ark Royal was the first carrier built and commissioned with an angled flight deck and steam catapults. These features drastically improved the pace of flight operations on carriers. The ship was commissioned in 1955 and served the Royal Navy until 1979. Interestingly, this Ark Royal actually spent more time undergoing maintenance and refit, 12 years, then she did in active service, 11 years. The final Ark Royal was light carrier that also served as the flagship of the Royal Navy. Utilizing the “ski-jump ramp” for take-offs instead of steam catapults, this Ark Royal’s air component consisted of the Harrier jump jet and several helicopter models. She saw active combat operations during the Bosnian War and the 2003 American invasion of Iraq.

She ended up in cruisers—commanding a half-squadron on the Bainbridge as a major.

TCS Bainbridge appears in the novelization of Wing Commander IV. The reference is a passing one in a single sentence, but the name Bainbridge should be well known to anyone who has studied the early history of the United States Navy. Commodore William Bainbridge was one of the early heroes of the US Navy. One of his most famous actions was engaging and destroying the HMS Java off the coast of Brazil in December 1812 while captain of the USS Constitution. For his long and dedicated service to the US Navy five ships have been named in his honor. Admiral Wayne Banbridge, of the Wing Commander novels Action Stations, End Run, and Fleet Action is also nod to the American naval hero. 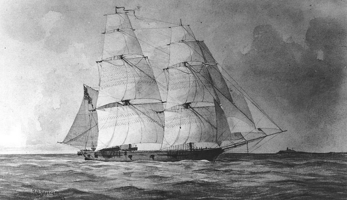 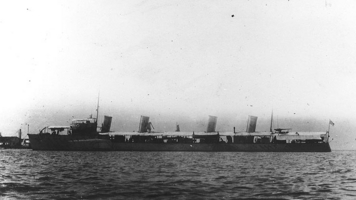 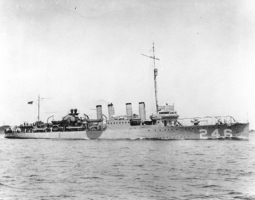 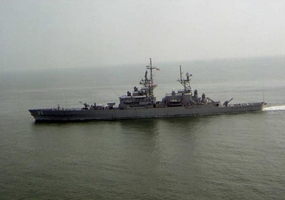 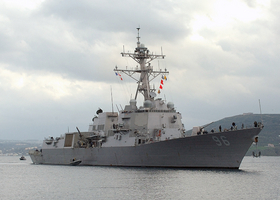 The five ships to bear the name Bainbridge.


The first was a 12-gun brig commissioned in 1842. She served in a variety of postings, including with the Home, Brazil and African Squadrons. During the American Civil War, the Bainbridge was lost off the infamous Cape Hatteras when she capsized with the loss of all but one of her crew.

The other four USS Bainbridges were all destroyers, although one was later reclassified as a “guided missile cruiser”. The second ship to bear the name was the first destroyer ever commissioned by the US Navy. Commissioned in 1903, the ship was the first in the long line of American “tin cans.” She served from 1903 until 1919, serving on patrol and convoy duties during the First World War. The third ship was a Clemson-class destroyer commissioned in 1921. She served during the Second World War in the Atlantic and received a battle star for her convoy escorting in the summer of 1943. She was decommissioned in 1945. The fourth ship was a nuclear-powered guided missile destroyer commissioned in 1962. Following an extensive refit and modernization in 1975, she was reclassified as a guide missile cruiser. During her service in Vietnam, this Bainbridge received eight battle stars. The latest American ship to be named Bainbridge is a Arleigh Burke-class guided missile destroyer that still serves with the US Fleet today. Commissioned in 2005, this ship is most famous for its part in the April 2009 pirate attack on the MV Maersek Alabama. After failing to secure the vessel, the pirates who had boarded the Alabama took Captain Richard Philips hostage in one of the ship’s lifeboats. US Navy SEALs, who had parachuted onto the scene and boarded the Bainbridge, stationed on the fantail of the ship opened fire on the lifeboat, killing the three pirates, when one of them pointed an AK-47 rifle at Captain Philips.

“The carriers we do have, other than Concordia , were launched before I was even born. They're antiques, held together with spit and duct tape. Even though Soryu is listed as being on-line, the truth is she's nothing more than a floating stockpile for spare parts, which get stripped out to keep the other five like her going. The fleet spends nearly sixty percent of its time docked right upstairs to save on engine time," and as he spoke he pointed up to where the fleet was now docked at Alexandria.

TCS Soryu has a single passing mention in the novel Action Stations. One of the six carriers of the Confederation’s Seventh Fleet, she was docked at space station Alexandria during the 2634 McAuliffe Ambush that began the Terran-Kilrathi War. She was destroyed when the Skyhook and Alexandria were destroyed during the attack. 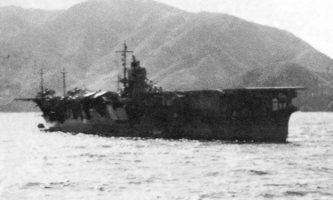 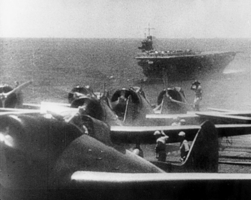 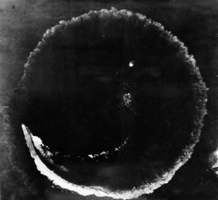 Soryu before the war, preparing to attack Pearl Harbor and circling to avoid B-17 bombers during Midway.


IJS Soryu should be a name familiar to any student of the Second World War. One of the four carriers that comprised Kido Butai (First Air Fleet) that launched the Raid on Pearl Harbor, bombed Darwin, Australia, raided British positions in the Indian Ocean and ultimately met their demise at the Battle of Midway. Soryu, which means “blue dragon”, was commissioned in 1937 during the Second Sino-Japanese War where her air group first saw action. The first months of the Pacific War witnessed an unbroken string of victories for the Japanese, especially Kido Butai. Success at Pearl Harbor, Wake Island, and the Indian Ocean was broken by the defeat at Midway in June 1942. In was has been called “five glorious minutes” (10:20-10:25 am, 4 June 1942), three of the four carriers of Kido Butai were struck by bombs from American dive bombers. Soryu suffered direct hits from three one-thousand pound bombs that ignited fully armed and fueled aircraft in her two hangar decks. The catastrophic fires generated by the bombs led the ship to be ordered abandoned at 10:45 am. 711 men were lost with the ship, of her normal compliment of 1,103, giving the ship the highest mortality of the carriers lost during the battle. This was a direct result of the hangar fires that engulfed the ship.

Twenty kilometers to starboard he saw CVE-4 Sevastopol and heard the chatter of her pilots on the other carrier's channel. The ship had jumped through five minutes ahead of them and most of their fighter squadron was out.

TCS Sevastopol appears only in the novel End Run during the Invasion of Vukar Tag. Sevastopol’s fighters handle space-based threats while the TCS Tarawa’s fighters handled ground support for the marines landing on Vukar Tag. Following the successful invasion her whereabouts are not mentioned. 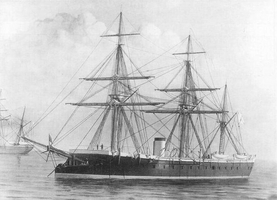 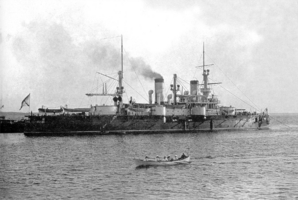 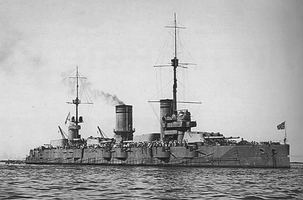 Three of the four ships to bear the name Sevastopol.


Four ships of the Imperial Russian Navy have been named after the city itself or famous Siege of Sevastopol (1854-55). The first ship was a 14-gun schooner commissioned in 1815 that was decommissioned in 1833. The second ship was a 32-gun ironclad frigate commissioned in 1865. Her entire career was spent with the Russian Baltic Fleet before her decommissioning in 1885. The third ship to bear the name was a pre-dreadnought Petropavlovsk-class battleship. Commissioned in 1900, the ship saw service during the Russo-Japanese War of 1904-05. She was at Port Arthur when the Japanese launched a surprise attack and took light damage during the engagement. This ship also took part in the Battle of the Yellow Sea where she sustained several shell strikes before returning to Port Arthur. She was scuttled after the Russians surrendered the port to the Japanese where her hulk remains, to this day, just outside the entrance to the port.

Wingnuts can read the rest of the series in the WC vs History Archive.