As the Blu-ray release of Wing Commander continues to approach, Walmart has posted a slightly larger and less distorted version of the movie's box art. Although their street date is still showing 8/13, the listing for the regular DVD rerelease shows 8/6, which is in sync with all other dates we've been hearing. Walmart's current preorder pricing is $16.18 compared with a $17.99 MSRP, and although Amazon originally listed the film at $12.59, the price has been fluctuating lately - first to $14.99 and then to $17.99. Such variation is common in the run up to releases like these, so your best bet is to preorder early at Amazon where you are protected by the 'pre-order price guarantee' that nets you the lowest price between the time you order and the product ships. Best Buy has also started taking preorders at $14.99, Barnes & Noble at $14.69 and Deep Discount at $14.14. It's getting closer! 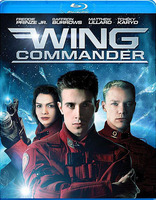 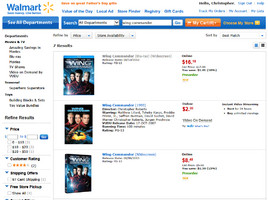 Based on a popular series of video games, Wing Commander introduces us to an elite fighter squadron in the year 2654. The Earth confederation is at war with a vicious race called the Kilrathi. The Kilrathi have captured a navigational device which will allow them to jump through worm-holes in space to arrive behind enemy lines. Only this highly trained squadron, led by three young pilots, stand in their way. Christopher "Maverick" Blair Freddie Prinze Jr. is just out of the Academy, but his lack of experience is more than compensated by his exceptional navigational skills, though he is still haunted by the deaths of his parents in a previous galactic war. His friend, Todd "Maniac" Mashall Matthew Lillard, is a brash, gung-ho fighter jock always rushing into danger. Their wing commander and leader is Jeanette "Angel" Deveraux Saffron Burrows. Assigned these two new pilots by Admiral Geoffery Tolwyn David Warner, the strong and beautiful Deveraux is at first resentful, but later develops feelings for Blair. Perhaps the two will find time for romance on their way to saving the solar system.