Today we've got three gorgeous new models available in the Terran Fleet Supply! Klavs has carefully colored and designed each one to be 3D printed. They all look superb, but the Broadsword is unique due to its super massive size. A large version is available to maintain proper proportions with the rest of the lineup, while a scaled down model has also been created to provide something closer in size to most other designs. As an extra bonus, flavor text for each ship has also been written below! As an extra, extra bonus, the Dralthi IV and Gratha models have been remade slightly to lower their cost at Shapeways. Yay! 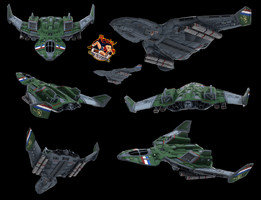 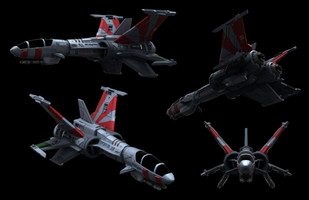 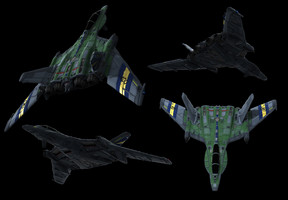 Our bomber's a very fine spacecraft,
constructed of paper and wood.
It's perfect for lugging cheap whiskey,
but for combat it just ain't no good!

Ah, the Broadsword. The crate the Sabre came packed in.

I kid I kid! I love this old girl. She really grew on me during the build process. Hope you guys like her.

The F-54s, much reviled by their human maintainers and pilots, found new life in the feathered hands of the FDF. Re-engineered for avian biometrics through the Firekkan semi-neural interface, The 'Ten-fin' as they became known, were thus transformed from a Confed disappointment into the legendary and iconic mounts of the Firekkan Defense Force.

Blair had a thing for grease monkeys. "Nice fuselage." He'd say, making everyone in earshot uncomfortable.

"I was talking about the Sabre."

Gives the rest of us a bad name, y'know?

-Unused material from Me: The Life and Battles of Maniac Marshall.