Here's a peek at one of Klavs' next models, the mighty Broadsword! We can't wait to see it side-by-side with the Ferret. The bomber looks massive and powerful from every angle, and the upcoming 3D print should make a great addition to any desk's strike force. There's new accompanying fiction that goes along with this one too, and it's not from Maniac this time! 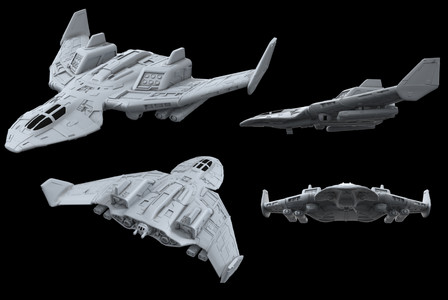 The Dralthi swings in low behind us.

Coasting without power, Agatha is dying. The Kilrathi pumps round after round into us. Mass drivers again penetrate the cabin. Harris and Burke are further distributed about the cockpit. Red orbs cloud my faceplate, but to wipe them away would blind me completely.

The Dralthi must have run down his gun charge, for presently he drifts alongside us to admire his handiwork. He is close, but still prudently above the firing arc of the poweless portside turret.

Soon, his guns have recharged and he slides aft to finish us off. Agatha staggers again and again. Tears of frustration and anger shut my eyes.

Agatha's little world tears to shreds around me. She is dying. I will not leave her to die alone.

I had no idea I could yell so loudly. The scream of white-hot rage reverberates inside my helmet, deafening.

Again, the bat wings have appeared on our left side.

He is very close. I can see his eyes.