Here's some fantastic shots of Monday's first supersonic rocket-powered flight of the Virgin Galactic SpaceShipTwo craft. They look straight out of something science fiction, but these are actual photographs! The SS2 hit Mach 1.2 at approximately 55,000 feet in these test flight, and the plan is to execute an actual space flight by the end of the year. Good Luck! 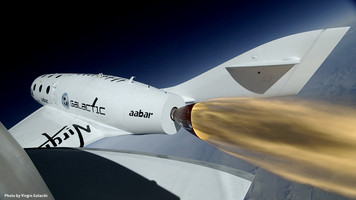 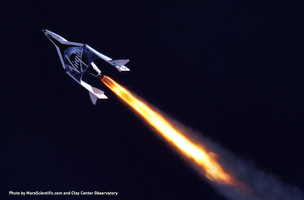 “The first powered flight of Virgin Spaceship Enterprise was without any doubt, our single most important flight test to date,” said Virgin Galactic Founder Sir Richard Branson, who was on the ground in Mojave to witness the occasion. “For the first time, we were able to prove the key components of the system, fully integrated and in flight. Today’s supersonic success opens the way for a rapid expansion of the spaceship’s powered flight envelope, with a very realistic goal of full space flight by the year’s end. We saw history in the making today and I couldn’t be more proud of everyone involved.”