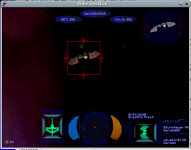 Magamo has good news in regards to playing classic Wing Commanders on Linux platforms. Although DOSBox is the most popular method for getting old games running on modern computers, it's far from the only solution. Due to the different ways that each program emulates old environments, some methods may work better than others with different hardware/software combinations. It's been about six years since Prophecy and Secret Ops (and mods like Standoff) first became functional by using the WINE application, and compatibility has now been expanded to include most original Wing Commanders. Here's Magamo's report:

Five years on, and I can now quite happily confirm that Wing Commander III from Kilrathi Saga, and Wing Commander IV for Windows 95 now work quite well under WINE (I'm using the latest released build, 1.5.18). WC3's movies no longer stutter, nor does WC4's in flight background music. I still see Darkmage's bug listed on AppDB, but I responded to it today reporting my findings. Wing Commander I, II, III, and IV installed today worked fine and dandy so long as WINE was set to Windows 95 compatibilty. Unfortunately, I am sad to report that sol's ddhack which worked in 2010 to improve several aspects of these games graphically, no longer works. On my system, it loads the games, but centers the image so that the bottom half of the screen is completely cut off.

I will possibly report on the status of Prophecy and Secret Ops, with UE and Standoff at some point, but the Vision engine games have been running brilliantly under WINE due to Posicle_Pete's OpenGL wrappers for years (years ago, I even got UE working through it, albeit without pretty starfields).