Wing Commander IV lacks the wide variety of 'missing scenes'--everything filmed made it into the finished game. The shooting script does include an alternate introduction, which begins with your choice of Flint or Rachel sending Blair a Dear John hologram... but despite the scene making it into the finished script, neither actress was ever hired (it would have been terribly confusing for new players, who were really needed to justify a twenty million dollar budget.) There is one short scene which has been long passed along as "cut"--a briefing from Admiral Wilford that doesn't play in the game itself. It's actually not that exciting, though: it does appear in the game as a postage stamp green "VDU" briefing... they just also included a full color cutscene version as well. You can download it here: 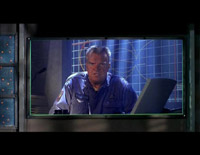