Wing Commander III marked a jump from popular game to Star Trek-style franchise. For the first time, regular companies wanted to license the Wing Commander IP--and lucky consumers could get card games, posters, novels and the like at their local stores. The first big licensee was a company called Zanart, which made t-shirts, hats and something called "Chromart." Chromart, a thoroughly 1990s idea, was framed artwork with portions printed in reflective chrome for a slight 3D effect. Zanart put out two Wing Commander 3 shirts, a logo hat and two Chromart pieces. The shirts and Chromart offered the choice between the Excalibur-bombing-Kilrah scene and the box art. 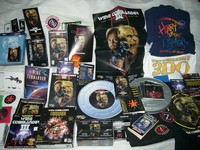