Reading Drafts is a Breeze

A big part of our WCpedia movie effort has been to include the various script drafts of the film for easy comparison. While some work is yet to be done, the labor intensive part is done and each draft can be read in it's entirety. All, four - yes four! - drafts are parsed and ready for you to enjoy. We've also provided links to the PDF scans if you would rather read the original copy. Note that the shooting script PDF was previously unavailable.

Special effort was put into entering the final shooting script into the WCpedia. This particular draft should be of interest to fans because essentially everything in this draft was shot and exists on film in some form somewhere. To better help you see what was changed in editing in the theatrical cut of the movie we've color coded the text. Anything in red-orange was deleted. Sometimes it's just a single line of dialogue that was removed, while others it's whole scenes. Anything in gold was changed either in a revision we're missing or in post production by means of ADR or other means. Any scenes headers or text in green indicates scenes or lines that got moved around in the editing. 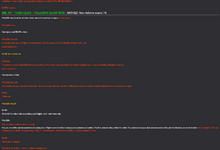