Deathsnake recently set out to see just how big the 22 kilometer Hvar'kann class Kilrathi dreadnought really is. His first image renders the occasional fan theory that the 22,000 meters quoted in Victory Streak was simply a typo. A 2,200 meter version is scaled next to a 1600 meter Vesuvius class carrier in the first image. However, visual evidence in Wing Commander 3 shows a dreadnought dwarfing the TCS Victory during the game's losing end scene. The perspective is at an angle that makes it hard to make an exact comparison, but the 720 meter carrier appears to be only as large as the the tip of the Kilrathi vessel's bow. This concept is rendered in the second picture. Fortunately, there's yet a third source that corroborates the ship's size: the novel False Colors makes numerous references to the Hvar'kann's outrageous size and treats it as a major plot point. The last two images demonstrate what the ship really looks like compared to other carriers in the Wing Commander universe! Amazing! 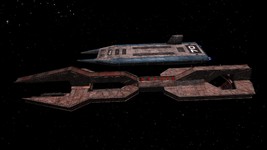 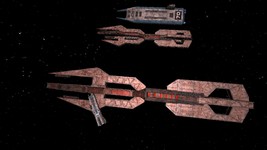 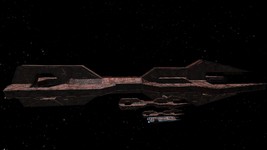 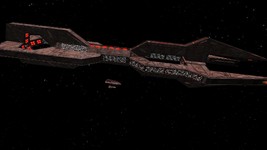 He stared at the readout for a long time before it hit him. The mass was wrong, completely different from everything in their records on the facilities at Baka Kar. The docking complex was supposed to be large, but these figures were almost twice what they should have been. Banfeld ordered the computer to zoom in on the orbital dock so that he could study it more closely.

It took along time for the computer imaging system to interpret the sensor data well enough to comply with his request, and that wasn't right either. Something anomalous was out there, something that was distorting Highwayman's probes . . .

Banfeld let out an audible gasp as the computer imager finally displayed a picture based on the collected data. Something massive really was over there, docked with the orbital facility. Something that dwarfed the spidery framework of the station. It was the biggest ship Banfeld had ever seen―if it was a ship, and that's what the computer was insisting. It measured nearly twenty-two kilometers in length, bristling with hardpoints and radiating an awesome amount of energy even when it lay quiescent alongside the dock.

The Guild leader had only heard rumors about such ships, but now he was sure he was seeing the reality behind those rumors. A Kilrathi dreadnought, one of the vast and powerful warships Prince Thrakhath had ordered for the final solution to the war with Mankind.

And it was here, with Ragark's fleet.

Cold fear washed over Zachary Banfeld. He had wanted to help Ragark even the odds so that the war on the frontier might be prolonged and the Guild profit from the war. But a Kilrathi dreadnought made all the defenses of the Landreichers useless. Even their new supercarrier would be no match for such a powerful ship of war, whether they fully restored it to fighting trim or not.

When the Kilrathi smashed their way across the border, the question of Guild profits would no longer be a factor in his plans. The question would be one of Guild survival.