DUCKTALES is back! The hit Disney Afternoon TV show makes a splash this month as an all-new, original ongoing comic book series! Written by the creator of the EPIC MICKEY video game and illustrated by the fan-favorite Disney duck artist Miquel Pujol, this is the latest and greatest revival of the Disney Afternoon Revolution that “might solve a mystery,” but will definitely “rewrite history!” Existing within the same continuity as BOOM!’s hit series DARKWING DUCK, find out why “life is like a hurricane!” 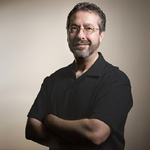