It's What's Inside that Matters

In 1999, a company called SciPubTech announced plans to publish a poster of the Wing Commander movie's version of the TCS Tiger Claw. It was a very exciting prospect--SciPubTech was known for mind-blowing cutaway posters of Star Trek and Star Wars spacecraft.

Sadly, it was not to be: the poster suffered several delays and the release was ultimately cancelled. Thanks to a postage-stamp sized preview showing the unfinished image, though, fans knew that a great deal of work had been done on the project.

Years of repeated attempts to contact SciPubTech about the image were met with silence; either the company had gone out of business entirely or they just weren't interested in talking about the Wing Commander poster. Finally, we decided to try a new tactic--find the artist responsible for the poster. Research revealed that Christopher Cushman was the man responsible for several of SciPubTech's iconic Enterprise posters... and NinjaLA was able to track him down!

Christopher turned out to be a very kind person and a fellow sci-fi aficionado who appreciated our cause. We learned that the Wing Commander poster was actually done by his equally talented brother, Matthew Cushman... and that it was finished and colored! 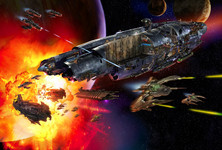