There's a couple more shots of Marc's Tarawa flight deck. The central control tower has been cleaned up, and the large orange tanks have a little surprise. Both have cool animated versions that you can check out below! 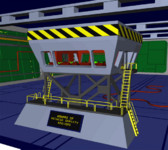 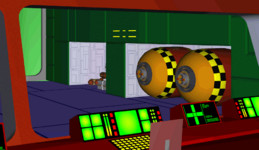 At first I was trying to flesh out Tarawa's flight deck because it only existed in the novels. And it was pretty useful as many members had different notions on how it was layed out (the TCS Tarawa was never visually featured in an official Origin/EA game, so there are infinite ways the deck could be).

Since then it's become an ongoing obsession of mine - "nothing to do? load up the Tarawa model!"

Because the End Run novel describes it as being an "elevated" platform facing the airlock. I imagine it would have read "hanging" or "suspended" if it was the way you describe it. Plus, given the average height of flight decks in WC, it'd be a hell of a long ladder climb (the novel also say there's a ladder).