Frontier Adds Yet Another Dimension

There's been a big change on Frontiere - Prelude to Darkness! For the next chapter, character animation will go from 2D to 3D with new three dimensional models. This change mirrors a shift that occurred in spaceflight rendering during the early stages of the fan movie's production. This should definitely add some new spice to shipboard and ground sequences, and there's still plenty of space combat to come as well! 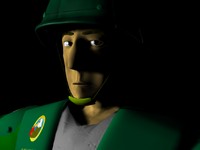 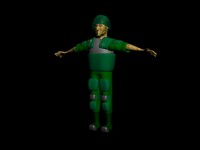 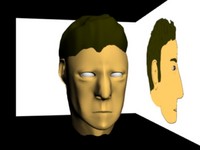 This week has seen a revolution in Frontier – the old 2D characters are out the door, the new characters for Part 13 are going to all be completely 3D modelled. Right here we have Private Devers, looking very serious. This will free up the previous constraints encountered by this production, such as more fluid and free camera movements, better perspective, better actions sequences (fights, chases, the list goes on and on), etc.

So I hope you all approve of the new direction, it is my hope it brings up the quality of the film. Previously you may have noticed certain times where there were limitations on character angles, as all we saw was – Front/Side/Back, now we can go everywhere. The modeling is being done using side and front shots of the original characters to try and keep it as close to the original as possible.

In regard to Part 13, we are still getting the voice lines back from the voice actors, most of the scenes have been modelled, but as we are overhauling the characters, this Part might be coming out a bit later than usual.

UPDATE: lew let us know that ongoing technical difficulties are likely to postpone the introduction of 3D characters for quite some time. In the mean time, production of regular animated Frontier PtD continues!