Remember when games asked you to enter the fifth letter on the third paragraph on page eight of the manual to make sure you weren’t playing a pirated copy? Yeah, we hated that too. But there were a few memorable games that managed to get creative with the way they used the manual to ensure you owned a legitimate copy.

Our favorite: Origin System’s Wing Commander. Instead of sending you on a soulless word hunt through the game’s manual, Wing Commander peppered you with fun trivia about the game’s lore and specifications of its various ships. Thanks to Wing Commander’s manual questions, we’ll always remember that the Fralthi has 28 cm of front armor and that the Ralari weighs 18,000 tons. 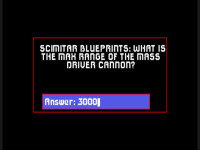