The Final Frontier Gets Dangerous

Kevin Caccamo continues to make progress on his Landreich Campaign addition to WC Saga. He's made the gun crosshairs resemble those in WC1/2 and added new graphics for missile locks, shields and other HUD elements. Gun blasts have a new muzzle flash and the Hornet can now 'Shelton Slide'. The project has even gotten a name, Wing Commander: Hostile Frontiers. 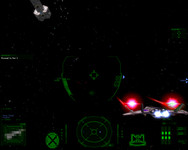 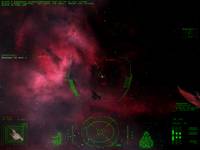 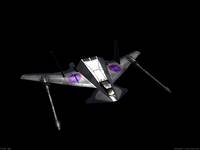 The next updates will give away some of the plot details about the main character and the beginning of the campaign, and possibly an interview. As a little preview of what's coming next, the main character's callsign is going to be Rider. Belated credit goes to Travis Baldree for the Hornet model.

Oh, and you know the reverse afterburn thing that Bondarevsky does in FC while escorting the Bonadventure on its kamikaze run? Although it's against just about every safety regulation, YOU CAN DO IT TOO! I added a reverse afterburner to the Raptor, thanks to a new feature in 3.6.12. To activate it in-game, press the decelerate key and the afterburner key at the same time.