Kilrathi Font Forgotten, But Not Gone

Designers Guild has put together a reference sheet for a Kilrathi font that was first designed in the weeks that followed the Wing Commander Movie premiere. We wrote about it in the news way back in March 1999, and then never again! It used much of the film's text and added a few more characters to get a complete alphabet. Several Kilrathi fonts exist in our download archives, but this one was seemingly lost when Geocities went offline. It's since been resurrected, and now you can see it again below. Don't worry, we saved (12 k zip) the file this time around! 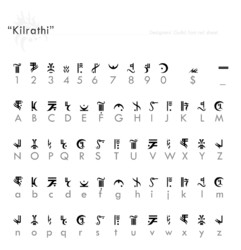 Use this as a reference for study, etc. As this is a charityware screen font (not a vector image font), just the layout and its template components are under copyright.

Mike H. Lee's Kilrathi true type font: This Kilrathi font comes from 1999 Movie: Wing Commander. The Canon letters are (A thru P), the rest of the font was invented by Mike. Kilrathi is an Ideographic language - the letters stand for a word or Idea. The little squares and dots change the meaning of the characters. The Kilrathi font, from what Mike has seen, can be written left to right & up and down. Michael Lee 3-17-99

Thanks to DrJon for the tip!