A lot of people have been curious about Super Wing Commander's Rapier II lately, since its appearance in Wing Commander Arena is descended from this design. Bob has mocked up a launch render for the fighter to give people another look at it. The scene is posed to mirror the perspective of Klavs' Flight Ops wallpaper. Although Bob put the image together really quickly, some of the original model's detailed alternative texture set is visible. Many of the ship's distinctive lines carry on to today's version too. The Tiger's Claw's hexagonal launch tube is also present in the background. Looks neat! 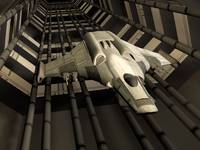 I made it as a counterpoint to Klavs's Flight Ops picture to show they share the same basic lineage. The SWC manual is what gave me the idea - the shot of the Rapier in it are in a similar angle and position. I had to switch the textures around. The interesting thing is that the Rapier has a bunch of alternate textures, which is part of what it's wearing in that shot.

Develop has posted an article about a new law offering a tax credit to Texas-based game developers. Although the latest Wing Commander is being developed in New York and Vancouver, this is presumably good news for a host of Wing Commander alumni who now run studios like Critical Mass and Spacetime. And hey, Origin founder Richard Garriott likes it:

While the scheme has garnered acclaim from both NCsoft's Richard Garriott, who is based in Austin, Texas, and the head of the Texas Film Commission, there are some limitations to the subsidies.

The state says it will not fund 'obscene' games with 'inappropriate content' or titles that 'portray Texas or Texans in a negative fashion'.